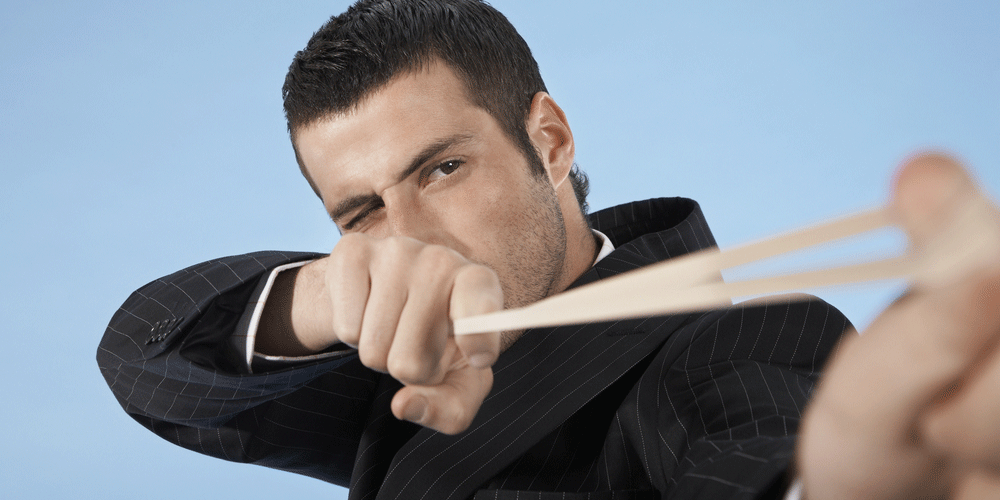 Here are a few common sales problems: you have gone through the entire sales process only to find out that the person you've been selling to isn't the “real” decision-maker; or maybe you were not able to gain access to the ultimate decision maker; or you've been working on an account, but the real decision process (who, when, how) is still unknown. Sound familiar?

We have all been in these situations before. These problems typically arise when you are selling into large, complex accounts with potentially multiple decision-makers and influencers – i.e., multi-level selling. A multi-level selling situation tends to arise when, for one or more reasons, a decision-maker is unwilling or unable to make the decision without the input of others. There are many reasons for this, including:

The challenge in any of these situations is that you may never really know how the decision is being made or who is making it. So in a multi-level selling situation the best way of increasing your odds of success it to sell to all of the decision-makers and influencers. That's why identifying all of the decision-makers and influencers is so important. It's easy to overlook someone whose influence isn't readily apparent, but it's absolutely necessary that you don't.

So what should you do if you find yourself in a multi-level selling situation?

A key first step is to “map” the account by conducting an analysis of the key players using the following four step process:

Step 1: Identify Decision-Makers/Influencers and Their Priorities

It's important to identify who will be involved in and affected by the decision/purchase. Here are common roles within an account:

After you have identified key players, analyze each of the key player’s priorities (financial, performance, service, etc.), that is, what are they most interested in regarding this purchase?  Analyzing their priorities can help you develop tactics in overcoming multi-level obstacles and capitalize on selling opportunities.

Most decision-makers will have a few priorities to some degree when making a purchase decision. However, you'll usually find that one or two priorities will be more important to a decision-maker than the others. Once you identify a decision-maker's dominant business priorities, it's easier to show how your solution addresses those priorities.

Multi-level selling dictates that you should sell to all decision-makers and influencers. To do otherwise is to take unnecessary risks, and while you may not be able to sell to everyone directly, you must find some way to sell to them (via email, telephone, or through someone else.)

Sometimes it's quite obvious who among the influencers has the greatest impact on the decision, but at other times, you may need to do detective work, or perhaps take some educated guesses.

Here are some additional ways to determine the degree of influence each person has:

Determine who's connected to whom in the account, either by political, functional, organizational, or personal ties. This is not an easy thing to do, but you should ask yourself and others in the account (tactfully, of course) questions such as:

“Who reports to the decision-maker(s)?”

“Who seems to meet with the decision-maker most often?”

“Which of the influencers seem to be on the career fast track?”

“Who seems to have a ‘mentor’ relationship with the decision-maker?”

“Who works on committees or special projects with the decision-maker or higher level influencers?”

And, of course... don't forget to consider organizational titles and lines of authority as guidelines in drawing connections.

Identifying commitment levels is challenging because it relies to a great deal on your ability to observe and assess each person. Assessing commitment levels will enable you to determine where your “support” is and how you can capitalize on it to sell more effectively. In simple terms, it’s imperative to learn who’s “on your side” and will back your proposition, and if they can help you gain “converts”. On the other hand, you need to determine who is not committed to you and your company, so you can determine tactics for converting or offsetting their potential resistance.

The skills for identifying commitment levels rely heavily on your ability to "read" people and to assess their relative positions. To simplify the process we focus on two interacting attributes, “receptivity” and “dynamic”. Receptivity is obviously how the decision-maker or influencer feels about you, your company, and what you have to offer. Dynamics refers to his or her ability to influence or persuade others; it’s a combination of being an effective communicator and being assertive in espousing positions. Someone who is very receptive to your proposals and dynamic can be of significant help and support in getting your message across.

To assess a person’s commitment level, you assess each of these interacting characteristics or abilities using High or Low values.

As you can see in the chart, we’ve labeled each quadrant with an appropriate descriptor of the commitment level. More important, you can then devise tactics to deal with people in each quadrant. 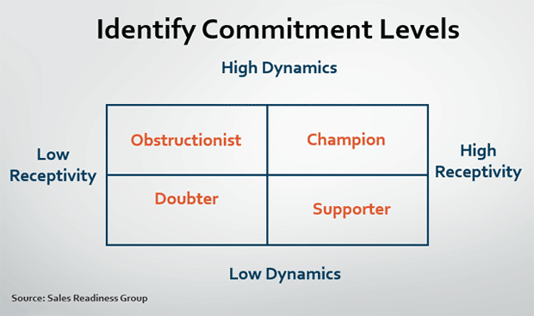 The four commitment levels are:

Multi-level selling is not easy. If you find yourself having to sell to multiple decision-makers and influencers, start by mapping the account by conducting an analysis of the key players. Once you've analyzed priorities, degrees of influence, connections among the key players, and commitment levels, you will then be better positioned to verify who the key people are and the best way to access them, identify problems before they become major obstacles, and sell to non-supportive influencers or inaccessible decision-makers.